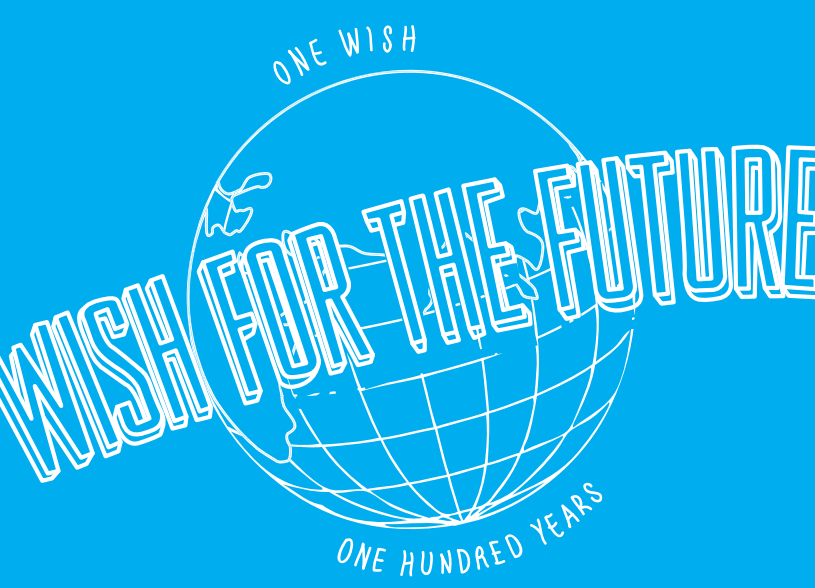 Title: Wish for the Future

Project Description: Wish for the Future mixes participatory storytelling and design science to envision a better world. Participants make a wish for the future. Wishes are granted through a creative act such as writing a story, making a piece of art, sharing a song, or creating a video. Then granted wishes are prototyped using 3D printers and software hacks in an effort to create a tangible artifact. Afterward, wishes, creative expressions and prototypes will be placed in multiple time capsules and buried for 100 years.

Inspired by the Voyager Golden Records that were sent into space in 1977 and the work of Buckminster Fuller, Wish for the Future is an effort to ignite the imagination of many through experiential learning, creative expression and collaboration.

Stats: wishes from 86 countries, 14 events held around the world to date

Wishes are made, granted and messages are written to the future at wishforthefuture.com

New Frontier Story Lab: Lance Weiler Solicits 100 Wishes For the Future. Founded by Robert Redford, Sundance Institute is a nonprofit organization that actively advances the work of independent storytellers in film and theatre.”>The 2012 New Frontier Story Lab takes place Oct. 21-26 at the Sundance Resort in Utah, where six creative teams and projects undergo an intensive residential retreat focused on creative support, which includes individualized story sessions, conversations about key artistic, design and technology issues, and case study presentations. Below is a recap of Creative Advisor Lance Weiler’s presentation of his latest work, “Wish For the Future.”

“I like to disrupt. I am a storyteller,” says Creative Advisor Lance Weiler as he introduces himself to the New Frontier Story Lab Class of 2012. And that is exactly what he is—a master dream weaver who forces us, whom he refers to as ‘those formerly known as the audience,’ to share, learn and ultimately contribute to a collective storytelling experience. His experimental approach to telling stories is in part a reaction to the ever-evolving landscape of media and how we consume it. But it is also, and most importantly, an embracing of the next, a discovery of new ways to discover—together.The often difficult to define space, known as #transmedia, is what brought Weiler to the 2011 Sundance Film Festival, where he launched , a multi-platform story experienced through film, mobile, online, social gaming, print, and real world interactions. One year later, at the Lab that his work has helped to shape, his latest work, Wish For the Future, also focuses on immersive storytelling. It is a project that mixes participatory creation using design science and experimental learning for discovery. An exercise that when applied to this group of Fellows, is meant to foster an engaging experience and produce a more full understanding of 21st Century storytelling.

Our first task is to come up with 100 wishes for the world in a matter of minutes. Everything from “Long walks on the beach” to “Love our bodies” and “World peace” is shouted out. Next, the Fellows are broken into three groups, each tasked with granting just one of these wishes, a wish that must work for 100% of humanity. The idea of a wish that works for all stems from a quote from Dr. R. Buckminster Fuller, “How do we make the world work for 100% of humanity?” The final wish? To end racism.

In the “100% group” an hour of questioning and debate goes by: What defines no racism? Can racism be eradicated if there is difference? How ethical does the solution have to be? The “prototype group” uses Play-Doh and markers, keeping their hands (and minds) constantly engaged as they brainstorm. The “storytellers” write down their ideas on paper, a process focused on sparking creativity. Finally, each group presents their (very different) vision of how to accomplish a world without racism.

What did we learn, besides being careful what you wish for? As Weiler says, in the creative process we have to “fail fast and learn from it.” We learned it’s all an experiment. It’s a process that can be messy and yield different results, but is by design, a process that brings together any number of different voices and varying opinions and gives them equal weight. A process that asks, “What does it mean to design with instead of for?” A question, Weiler says, must be addressed in a world where the audience is becoming more and more the storyteller. What is your wish for the future…of storytelling?